Kiran Dighavkar remembers the first COVID-19 case in Dharavi in April 2020. The government-mandated lockdown had just been imposed across the country. Dighavkar, a trained civil engineer, was leading COVID-19 management in Dharavi, Asia’s largest slum located in the Indian city of Mumbai. From the beginning, Dharavi was seen as a ticking time bomb.

It was not feasible to implement COVID-19 measures such as social distancing and home quarantine in the neighbourhood where 80 percent of the population depends on 450 community toilets, and the majority of households don’t have kitchens. In many houses, families of up to eight sleep in one room.

Dighavkar, the assistant commissioner of the Municipal Corporation of Greater Mumbai (BMC)—the governing civic body of Mumbai—had a huge task at hand.

Before the official announcement of the outbreak in March, the 38-year-old had just returned after holidaying at the beaches in the Indian coastal city of Goa. “Back then, we were only tasked with reviewing and screening high-risk cases, mostly foreigners,” he told VICE News.

When he landed back in Mumbai from his vacation, he had no clue about the severity of the virus.

“And then the first case hit Dharavi,” he said. “It was April 1, and we rushed to the patient’s house to trace his contacts. Unfortunately, this high-risk patient died within a few hours in the hospital. When we traced his contacts, we were looking at tracing 72 people. We had just one day.”

Today, as Dharavi gains international recognition for controlling the spread of the deadly virus, Dighavkar looks back at how it all started. There is relief in his voice, along with the heaviness from the enormity of labour in this unlikely success story.

In a country where the public healthcare infrastructure continues to crumble under immense pressures from the pandemic, the Dharavi model has been called a “miracle”. 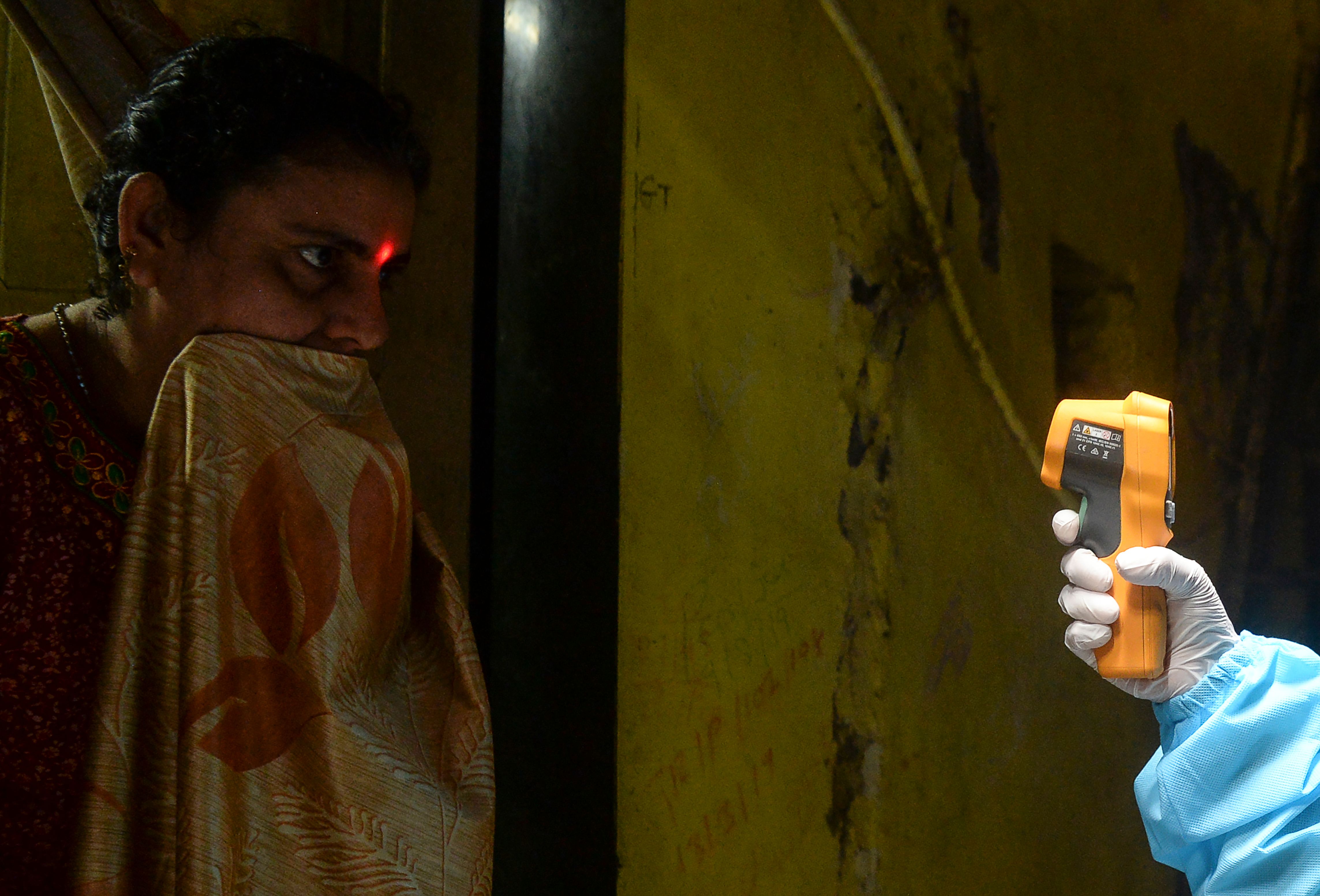 A health worker checks the temperature of a resident inside a lane of the Dharavi slum during a door-to-door COVID-19 coronavirus screening. Dharavi’s aggressive testing and contact tracing has been lauded around the world. Photo by Indranil Mukherjee/ Getty Image

India has the second-highest confirmed cases of COVID-19, at 7.1 million, second only to the US. Last month, the country was averaging almost 100,000 cases a week.

On Monday, October 12, the latest official data from Dharavi showed five new cases in the active caseload of 162. The neighbourhood has had 3,336 total cases in all, and 2,872  people have recovered.

The unlikeliness of the Dharavi story comes from the fact that in the face of escalating COVID-19 cases, a potential hotspot has managed to control it the most.

In July, the World Health Organization lauded the Dharavi model for breaking the chain of transmission and fighting the virus. In August, the government of the Philippines reached out to the BMC to implement the Dharavi model in its densely populated slums. Last week, the World Bank praised the “customised solutions” in the slum.

From the first COVID-19 patient—a 56-year-old garment shop owner, who succumbed on the same day he was admitted—to now, Dighavkar has a team of around 4,000. Out of that, 2,500 are permanent staff and 1,250 doctors and others.

They knew that going after those who report high-risk symptoms would be too little, too late. With no vaccine in sight, or antidotes such as Remdesivir in hospitals, Dighavkar and his team faced an unknown enemy in a familiar battleground.

“We knew from the beginning that the traditional methods of contact tracing and social distancing would be impossible in Dharavi,” said Dighavkar. “When the first case turned up, we realised that we will have to devise our own methods.”

While they were contact tracing, the team realised that a lot of people were contacting various hospitals for breathlessness. “This is how we set out to nip the bud. We decided to screen the entire Dharavi.”

At the time of such adversity, the BMC found overwhelming support. Private doctors practicing in Dharavi reached out to the task force after they had to down their shutters due to the pandemic. NGOs sent food, grocery parcels and huge donations, along with medical equipment such as masks, sanitisers and PPE kits. “In fact, our team didn’t have to buy a single mask, sanitiser or a PPE kit while working in Dharavi,” said Dighavkar. “Such was the power of the community.”

The task force screened almost 50,000 people, identified 600 suspects and out of those, a little over a 100 tested positive—all in the first week of April. “Instead of waiting for the virus, our goal was to chase it,” said Dighavkar.

Weeks later, and the whole neighbourhood had community kitchens, medical camps, 24/7 doctors and medical staff, labs and even institutional quarantine centres. “Since home quarantine is not possible here, we converted everything from the sports complex to marriage halls into quarantine centres,” he said. There were provisions of food as well as medical facilities. Anyone with the slightest symptoms voluntarily informed the officials and turned up.

This is in stark contrast to stories from other Indian states at the time, where those quarantined in government facilities were running away, or dying by suicide. A major reason was attributed to the lack of faith in COVID-19 government infrastructures, along with fear of stigma and misinformation about the virus.

Another strategy in Dharavi was to identify containment zones, in which barricades were installed and police reinforcements were brought in. For every containment zone, there were provisions for food and utilities. The BMC also built its own hospital with 200 beds within 14 days, equipped with oxygen supply. There is a “war room” too, for the residents to check in with the officials any time. Around 90 percent of Dharavi patients were treated inside Dharavi, according to BMC officials.

“We saw the real results in June and July,” said Dighavkar. “In July and August, we literally saw just single-digit cases.”

There have been concerns ever since the Indian government started easing lockdown restrictions to restart economic and commercial activities across the country. There have been reports of a second spike, too. “Dharavi is not an echo chamber,” said Dighavkar. “The neighbourhood houses migrants, and most of the residents step out to work and come back. Yesterday (October 11), Dharavi saw 12 cases. It usually stays below 15 cases.”

The team suffered one casualty of an inspector during the operations as well. “I was on the call with the officer until the last moment,” said the official. “It felt horrible. I was shaken, struggling to motivate my staff. But I had to show that our resolve must not break. Every day, I showed up with the team in Dharavi.”

Last month, the father to two children—one aged 10 and the other six—Dighavkar took his first holiday after isolating himself away from his family for months and working weekends. “I went back to Goa,” he said with a laugh. “But we have a new challenge for now: behavioural change.”

Dharavi, which is also the hub of the informal economy in Mumbai worth an estimated USD 1 billion, mostly comprises lower-middle economic strata and those below the poverty line.

“It’s easy to say, ‘Wear a mask.’ Here, if you stop anyone for not wearing a mask, they’ll turn around and say, they can barely afford food, let alone a mask,” said Dighavkar, whose task force now distributes free masks and sanitisers to Dharavi residents.

“Instead of waiting for the virus, we chased it.”Read More

‘I hope they end it’: Trump tells ’60 Minutes’ killing ObamaCare will ‘be so good’ – despite coronavirus pandemic

‘Here I am’: Trump highlights his lack of death to downplay the risks of coronavirus at MAGA rally