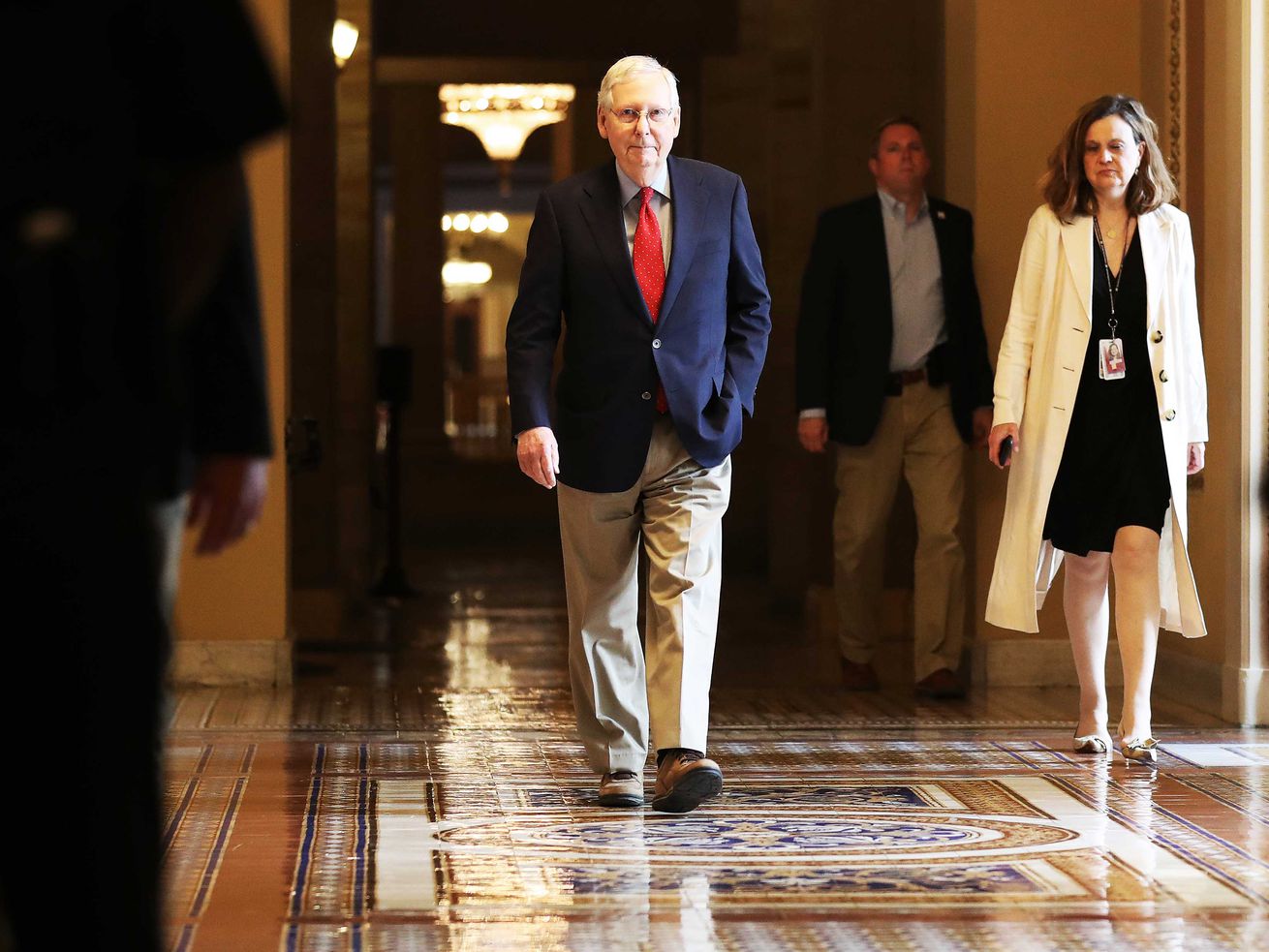 Coronavirus testing shortages pose a major obstacle to reopening the economy — and Congress.

When senators return to DC on Monday, there won’t be enough coronavirus tests for all of them to get proactively screened.

According to a report from Politico’s Burgess Everett and Marianne LeVine, the Capitol’s attending physician, Brian Monahan, informed Republicans about the dearth of tests during a phone call on Thursday. In this conversation, Monahan said that lawmakers and staffers who are in need of tests would likely be able to get one, but added that capacity is so limited that it wouldn’t be enough to cover all 100 senators.

Despite ongoing concerns about the coronavirus’s spread, Senate Majority Leader Mitch McConnell has nevertheless expressed confidence in the decision to have the Senate return to the Capitol on May 4. The House, however, will not be following suit. House Majority Leader Steny Hoyer announced that members would not physically come back to DC just yet, after conversations with Monahan earlier this week.

The Capitol’s limited testing capacity is concerning in itself: Many senators are over the age of 65 and within the range of individuals who are more likely to experience severe coronavirus symptoms. And while in the Capitol, their work inherently brings them, and staffers, into close contact with one another.

Prior to departing for recess, senators were spotted in tight groups on the chamber floor during a stimulus vote. And when Sen. Rand Paul (R-KY) tested positive for Covid-19, several of his colleagues including Sens. Mitt Romney (R-UT) and Mike Lee (R-UT) had to self-isolate out of concerns about their exposure.

The Senate’s testing shortage is also emblematic of a broader problem the country continues to face: Even after recovering from a slow start on the subject, America’s testing capacity is still very far from what it needs to be for regular business and social gatherings to resume.

There are many compelling reasons for Congress to return to the Capitol including, specifically the need to advance more much-needed stimulus for workers and businesses that are reeling from the economic fallout of the coronavirus pandemic.

“We have a crisis to continue to work through. Our services are necessary. And in order to perform those services, we have to perform them here in Washington,” Lee said in a floor speech in April.

The big question, however, is whether lawmakers will be able to return and work on legislation — as well as McConnell’s coveted judicial nominations — in a safe way. Several Democrats have voiced concerns about the ability to do so given the information offered by the Capitol physician about the current state of the pandemic.

As Sen. Dianne Feinstein (D-CA) noted in a statement, one senator, eight Capitol police officers, and 11 construction workers on a House renovations project have already tested positive for the coronavirus. She argued that lawmakers would be increasing the risk of spreading the disease to themselves and their staff by returning.

“The Attending Physician of Congress, Dr. Brian Monahan, advised House leadership that he recommends against resuming their session,” Feinstein said in a statement. “That’s why I ask the majority leader to reconsider his plan to reconvene the Senate.” The House, after all, announced earlier this week that it would not return next week based on concerns that Monahan had expressed about the growing number of cases in the Washington DC area.

McConnell has said there will be certain precautions taken to address lawmakers’ worries, including staggered voting.

Still, given the Capitol’s limited testing capacity, it’s unclear if Congress actually has the resources it needs to proceed in a secure fashion. As Politico reports, the Capitol physician notes that tests will take roughly two days to turn around for those who need them.

The uncertainty surrounding Congress’s return is similar to that hanging over states’ decisions to slowly reopen businesses and the broader economy: While there’s obviously an urgency around doing so, the shortages in testing make it very difficult to move forward without running the risk of spreading the virus even further.

As Vox’s German Lopez has reported, increasing the number of available tests is vital because it enables doctors and the government to identify who’s sick and attempt to trace others they’ve contacted in order to prevent further spread. As of last week, the US wasn’t doing enough, Lopez writes.

Whatever the case, even the best days of testing in the US are still far from what experts say is necessary to allow the country to safely reopen the economy. On the low end, experts say the US should be able to do a minimum of 500,000 tests a day. At the high end, some have called for much more — up to the tens of millions a day.

So far, America isn’t even getting close to the low-end requirement.

In lieu of ramping up testing to a sufficient level, the main option is to continue social distancing — both in Congress and beyond.

Since the pandemic hit earlier this year, Congress has struggled to legislate remotely, in part because there’s no clear mechanism to vote remotely on bills.

Although House Democrats are interested in advancing a proposal that would enable “proxy voting” in which some members can designate others to physically represent them on the floor, these plans have generated pushback from Republicans. In the Senate, too, McConnell has shot down an effort by Paul to advance a temporary remote voting procedure.

The push for lawmakers to return makes a lot of sense in the context of what’s still needed to help the US weather the massive unemployment and business shortfalls that have resulted since the coronavirus spurred stringent social distancing policies and closures.

The need to risk their personal health — and that of their staffers — in order to advance the country’s legislative needs, however, is a dilemma that could be resolved by approving remote voting procedures.

After 10 months of downplaying the coronavirus pandemic and disparaging government restrictions designed to mitigate the spread,