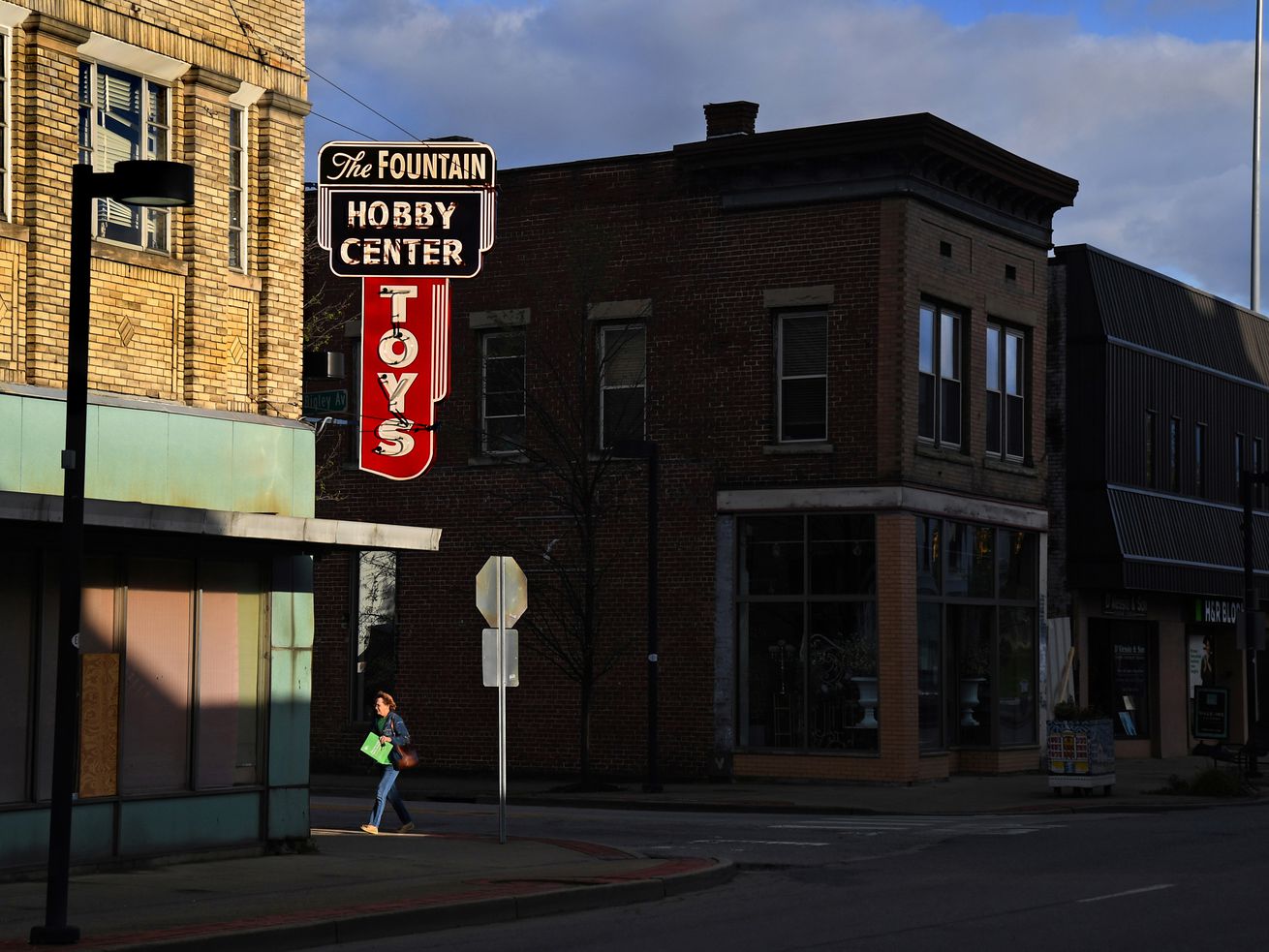 With many businesses closed — like those shown here, in downtown Charleston, West Virginia, on April 13 — Americans are losing their jobs and their health insurance. People in states that refused Medicaid expansion may be left with no options. | The Washington Post via Getty Images

Republican-led states have for years refused to expand Medicaid eligibility to many of their poorest residents, and now, in the midst of the coronavirus pandemic and an unprecedented economic crisis, thousands upon thousands of Americans will fall through that hole in the safety net and end up uninsured.

This was completely avoidable.

The Affordable Care Act was designed to extend Medicaid coverage to everybody living in or near poverty. But Republican resistance to the health care law, enabled by a 2012 ruling from the US Supreme Court, prevented that vision from becoming a reality. Today, 14 states have not expanded Medicaid access. Poor people — particularly black Americans living in the South — have already been paying the price for that obstruction for years.

But today, in the middle of the coronavirus outbreak, many thousands more are going to discover the harsh reality that the United States has failed to adequately protect its poorest citizens from financial ruin in a medical emergency.

New estimates from the Urban Institute provide a fuller understanding of the cost of those decisions during the Covid-19 crisis. With record unemployment upon us, the institute’s researchers anticipate that between 25 million and 43 million Americans will lose their employer-sponsored health coverage along with their job. In the 36 states (plus Washington, DC) that have expanded Medicaid through the ACA, less than a quarter of those people are expected to become uninsured. Most of them are expected to end up on Medicaid, as intended.

But in the 14 states that still refuse to expand Medicaid, a full decade after Obamacare became law, about 40 percent of the people who lose their jobs and their health insurance will end up with no coverage at all.

Those newly uninsured people will be less likely to seek necessary medical care, the available research tells us, and more likely to face financial catastrophe if they do have a medical emergency — coronavirus-related or otherwise. The price tag for treating Covid-19 if a patient ends up hospitalized is anywhere from about $10,000 to north of $20,000. And these will be people who just lost their job and therefore their income. Enhanced benefits for unemployment aren’t going to cover a $15,000 hospital bill.

Tens of thousands uninsured, hospitals on the brink of bankruptcy, all amid a devastating pandemic. It didn’t have to be this way.

A potent cocktail of improvisational legislating, small-c conservative jurisprudence, and partisan obstinance sent the United States cascading down a path that ends with so many people unable to get health coverage during the coronavirus outbreak.

Back in 2009, when Democrats were debating what became the Affordable Care Act, they sought a balance between setting up new marketplaces where people could purchase private insurance (with the help of government subsidies) and expanding eligibility for Medicaid, then a patchwork of state and federal programs that covered, broadly speaking, poor elderly people, children, and parents, but not many childless adults.

Pressure to keep down the Congressional Budget Office’s cost projections and meet President Barack Obama’s promise that the new health care law would be deficit-neutral motivated Democrats to put a lot of people on Medicaid because the public program was cheaper than subsidized private coverage. To ensure compliance from the states, which are tasked with jointly funding as well as actually administering Medicaid benefits, Congress wrote into the law that they must expand the program’s eligibility up to 133 percent of the federal poverty level or else risk losing the federal funding for their traditional Medicaid program.

That would mean blowing a huge hole in state budgets. It was an offer states could not reasonably refuse. And that’s what got Obamacare in trouble with the Supreme Court.

In 2012, while Chief Justice John Roberts and the liberal coalition on the court declared the law could stand overall, the justices also ruled in an overwhelming decision (7-2, with liberals Stephen Breyer and Elena Kagan joining the conservatives) that the Medicaid expansion provision was too harsh. It was a “gun to the head” of states, as Roberts put it in his ruling.

Instead, states would have the choice of whether or not to expand Medicaid. And many Republican-led states quickly announced that they would not agree to a central provision of a law that they had already spent years vilifying as an assault on freedom. It did not matter that Medicaid expansion was, for states, an incredible deal. The federal government would cover 100 percent of the program’s cost for the first three years and, after that, 90 percent in perpetuity.

To justify turning down billions of dollars in federal aid that would help some of their most vulnerable citizens, Republican state officials have proffered a few spurious excuses. Some of them said the feds could renege on their promise to match 90 percent of the costs. (To date, this has not happened and, in fact, during the Covid-19 outbreak, the feds have started picking up even more of the tab for Medicaid enrollees.) Others said that Medicaid expansion perversely prioritized able-bodied adults over the elderly or disabled (a talking point I rebutted at length for Talking Points Memo; in short, there was no evidence and there have been no examples of states cutting benefits for those populations because of Medicaid expansion.) Sometimes, Republicans said they simply could not afford to cover 10 percent of the Medicaid expansion costs (never mind that health care providers were more than willing to help pay the state’s share if it meant reaping billions of federal dollars).

Over time, some Republican-led states had a change of heart. They sought waivers from the Obama administration to add some conservative-friendly policies — like nominal premiums for Medicaid expansion enrollees — as a fig leaf for their conversion. Even Mike Pence, then the governor of Indiana, found the stomach for accepting this key Obamacare program.

And in some states, the issue was put before the voters and they have overwhelmingly embraced Medicaid expansion. In 2018, the solid-red state trio of Idaho, Nebraska, and Utah voted through ballot initiatives to expand Medicaid.

To date, more than 15 million people have been covered by Medicaid expansion. It is the ACA’s signature success story. But those gains have not been realized everywhere.

The South, in particular, has been a bulwark against Medicaid expansion. No southern states save Arkansas and Louisiana have taken the generous deal offered by Obamacare. Almost all of the 2.3 million people who’ve been left uninsured because their state won’t expand Medicaid live in the South, half of them in Texas and Florida alone.

And given the demographics of those states, it is disproportionately poor black and Hispanic Americans who are paying the price for decisions made by frequently white and wealthy politicians. Those choices have consequences, especially today, when black people are dying from Covid-19 at higher rates than their white neighbors.

Activists have tried to make inroads in those states, some of which don’t make ballot initiatives a viable path for policymaking. Roy Cooper, the Democratic governor of North Carolina, has been locked in a battle with his Republican state legislature over the issue. The story of Medicaid expansion is not over yet. It has been slowly but steadily extending its reach over the last 10 years, helping more of the people it was supposed to help.

But the work is not complete and, for many of the 30 million Americans who have lost their job in the last month, it is too late. They will be left to pick up the tab if, heaven forbid, they or somebody who depends on them gets sick.

The research tells us thousands of lives have been saved by Medicaid expansion. We can now only hope that lives won’t be lost because Republicans found it untenable to swallow their partisan pride and bring aid to their constituents who needed it most.

Texas is posting record-high numbers of coronavirus cases, but that isn’t stopping Republicans from planning

The most populous country in Latin America grapples with an enormous coronavirus surge that critics have blamed on Bolsonaro’s administration’s response to the pandemic.

Trump is trying to kick out foreign students amid the pandemic